A new double mutant variant of the coronavirus and 771 others have been detected in samples collected from 18 states across India.

Of the 10,787 samples, 736 were positive for the UK variant, 34 for the South African variant, and one for the Brazilian variant.

The report comes amid a recent surge in Covid cases in India.

But the government said there was no link between the spike in cases and these variants.

India reported 47,262 cases and 275 deaths on Wednesday – the sharpest daily rise this year.

The Indian SARS-CoV-2 Consortium on Genomics (INSACOG), a group of 10 national laboratories under India’s Health Ministry, carried out genomic sequencing on the samples. Genomic sequencing is a testing process to map the entire genetic code of an organism – in this case, the virus.

The genetic code of the virus works like its instruction manual. Mutations in viruses are common but most of them are insignificant and do not cause any change in its ability to transmit or cause serious infection. But some mutations, like the ones in the UK or South Africa variant lineages, can make the virus more infectious and in some cases even deadlier.

A double mutation, virologist Shahid Jameel explains, is “two mutations coming together in the same virus”.

“A double mutation in the key areas of the virus’s spike protein may increase these risks and allow the virus to escape the immune system and make it more infectious,” he adds.

Spike protein is the part of the virus that it uses to penetrate human cells.

The government said that an analysis of the samples collected from India’s western Maharashtra state shows “an increase in the fraction of samples with the E484Q and L452R mutations” compared with December last year.

“Such [double]mutations confer immune escape and increased infectivity,” the Health Ministry said in a statement.

Dr Jameel added that “there may be a separate lineage developing in India with the L452R and E484Q mutations coming together”.

But the government denied that the rise in case numbers was linked to the mutations.

“Though VOCs [variants of concern]and a new double mutant variant have been found in India, these have not been detected in numbers sufficient to either establish a direct relationship or explain the rapid increase in cases in some states.”

The recent report comes after several experts had asked the government to step up genome sequencing efforts.

“We need to constantly monitor and make sure none of the variants of concern are spreading in the population. The fact that it is not happening now doesn’t mean it will not happen in the future. And we have to make sure that we get the evidence early enough,” Dr Shahid Jameel, a leading virologist, told the BBC’s Soutik Biswas earlier this month. 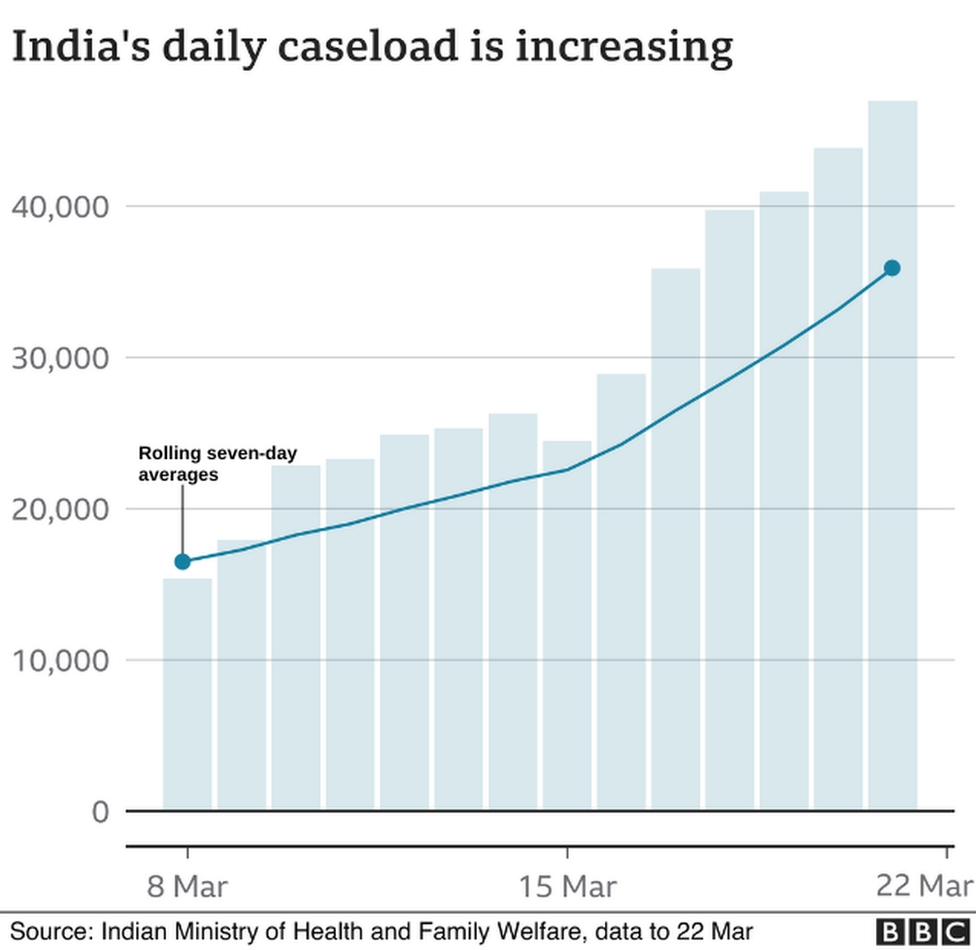 India became the fifth country in the world to sequence the genome of the novel coronavirus after it isolated it from some of the first cases the country recorded in January last year.

More than 11.7 million cases and 160,000 deaths later, efforts are continuing to identify mutations.

The latest surge – which began this month – comes during what some experts have called a ‘delicate phase’ for India – the healthcare system is already exhausted from a year-long battle against the coronavirus.

States have already begun re-introducing restrictions, including curfews and intermittent lockdowns, to control the spread of the virus.