The Ministry of Youth and Sports has refuted reports that Milovan Rajevac will be paid $45,000 per month as the new Black Stars head coach.

A three-member committee was set up and tasked to find a new head coach after the dismissal of Charles Kwablan Akonnor and settled on the re-appointment of Serbian the Serbian trainer who was first in charge of Ghana between 2008-2010.

It had been widely reported in the local media that that the former Qatar manager will earn $45,000 monthly salary but the Sports Ministry, which pays the salaries of national team coaches, has moved to quell the reports, branding them as “untrue” and lacking “basis”.

According to the press statement, the Ministry says it is awaiting the report of the Ghana Football Association (GFA) on the engagement of a new coach.

The task of the new manager will be to qualify the team to the 2022 FIFA World Cup to be hosted in Qatar.

Ghana, under Akonnor had a shaky start to the qualifying series managing three points from two games against Ethiopia and South Africa.

Read the press statement below: 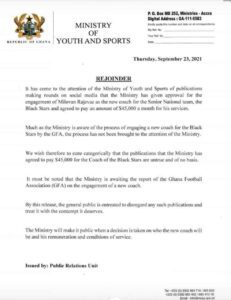