Fort Nassau was the first fort that the Dutch established in Ghana.

Its groundbreaking ceremony on the West African Gold Coast was executed on the 1st of March, 1612 by Dutch General Jacob Clantius (other spelling: “Callantius”). This was done in the coastal village Mouri (Ghana) at the foot of the “Mount Cong” on-demand of the then King of Sabou after repeated Portuguese hostilities against Dutch presence on the coast.

Around 1598, Dutch merchants traded on the Gold Coast of Africa. Although the Gold Coast was already settled by the Portuguese, there was little effort to evict the Dutch, as the military resources were committed to the war in Europe.

This changed after the signing of the Twelve Years’ Truce between Portugal-Spain and the Dutch Republic in 1609. The Portuguese now had sufficient resources to protect their trade monopoly and began attacking the  Dutch factories on the coast. In 1610, the factory at Mouri was burned to the ground. Dutch traders then petitioned the States-General of the Dutch Republic to build a fort on the coast. The States-General was receptive to their demands and sent Jacob Clantius, who was to become the first General on the Cape Coast, to the Gold Coast in 1611. In 1612, the Treaty of Asebu was signed between the Dutch and the chief of Asebu, which allowed for the establishment of Fort Nassau at Mouri.

Although no copy of the treaty survived, legend has it that, the king of Asebu sent two envoys by the names of Carvalho and Marinho to the Dutch Republic to confirm the treaty. The names of these two indicated that they were local Christian African-Portuguese. 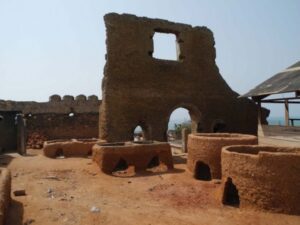 The fort in ruins

Under the terms of the treaty, the Dutch were forbidden to trade in areas occupied by either Spain or Portugal. The Portuguese claimed the entire Gold Coast as theirs; by concluding this treaty, the Dutch, who had been trading on the Gold Coast since the 1590s, laid their claim on a part of the coast as well.

In 1612, Clantius built a reinforced fort at Mouri, which, due to the unfamiliarity of the Dutch with building in the tropics, was known for its unhealthy conditions. In 1624, the Dutch considerably expanded the fort. Fort Nassau served as the capital of the Dutch Gold Coast from its establishment until 1637 when the Dutch captured Fort Elmina from the Portuguese.

Now the remains of the war, and the Nassau Fort lay in the bossom of Cape Coast, symbolizing the reign and activities of the Dutch during their time in the Dutch Gold Coast, now Ghana.

No fee is taken before one can go sightseeing. It is open to all, both Ghanaians and foreigners who need to learn about the history of the Fort.