Friday, January 15
Jamestown  a fishing community in Ghana, inhabited primarily by the Ga’s, played a significant role in the growth of Gold Coast. In 1876, Jamestown replaced Cape Coast as the capital city of Gold Coast. Today not much has changed as the Greater Accra Region, where Jamestown is located in the capital city of Ghana.
Although Jamestown is now in ‘a state of decay’, areas of Jamestown used to be the former homes of the wealthiest African residents of Accra, Swalaba, Korle Woko (formerly also known as Ripponville), and Akoto Lante.
The fight for the mightiest tribe among the Akwamus, Akyems and Gas, during the British colonial rule, began when the then, Ga Mantse Okaikoi made political decisions between 1673 and 1677 that had a great impact on the wealth of Jamestown. He wanted the Ga to have a complete monopoly in Accra over the slave trade.
At the peak of the slave trade, he tried to prevent merchants from the forest kingdoms from having direct contact with the European forts on the coast. He decreed that all commerce between Europeans and the inland merchants should be conducted through Ga middlemen at a market called Abonse located several kilometres from the coast.
These decisions angered the Akwamu who were the principal trading nation for the Ga in the 17th century. They and the Akyem, another trading nation, retaliated by mounting slave raids on Accra territories and tried to weaken the kingdom.
Wars broke out, that ended in the defeat of Okaikoi’s armies in 1677. The king was captured and beheaded. This was successful, because, the king’s generals he worked with, still held unforgiveness in their hearts, for the king and his father’s decision to allow Europeans to establish a permanent presence on the coast.
They detested him as much as they had hated his mother, the Obutu princess and regent Dode Akai who was killed by her generals in a bloody coup d’etat. 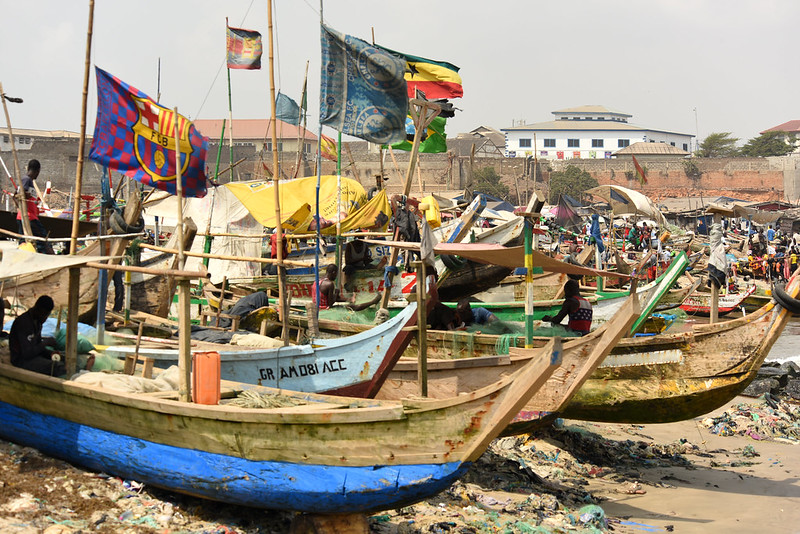 All these grievances and lack of unity among the Gas led to the decline of Jamestown as the principal business centre in the colony began 1920’s when the British governor Sir Gordon Guggisberg built a new harbour at Takoradi to serve the colony’s newly established extractive industries.
The loss of business had a huge impact on Jamestown harbour as well as the community of businesses that serviced it. Jamestown was finally compromised as a business centre in 1962 when Tema harbour was commissioned by Kwame Nkrumah. No new industries of any importance were introduced to replace the lost facilities. A feeble attempt to sustain the local economy led to the fishing industry which was still not enough.
The local economy had to survive then on a subsistence economy based on small scale retailing and sale of street food.
The dawning of the colonial period brought Jamestown to its apogee as the richest and most lucrative Akotso in Accra. The era began with the installation of important infrastructure in Jamestown that enormously enhanced its position as the trading centre. A light-house was built near the James fort in 1871. It was rebuilt in 1892 and a breakwater was added to it at the beginning of the 20th century. They formed the first man-made harbour on the coast and confirmed Jamestown status as an important export centre.
Potable water was brought into the city in 1914 and is commemorated by a monument near the James fort.
Now, Jamestown is not only known for the Lighthouse but its beautiful culture, The annual Chale Wote Street Art Festival, which has introduced a vibrant alternative visual and performance culture projected by artists based in Ghana and around the world, architecture consisting of colonial remains seeded with shacks made of wooden bars and concrete.

These structures line the shoreline of Jamestown where large canoes with rice-sack sails among cloth separations and makeshift cabins made by the hardworking fishers, and boxing activities, for nurturing and supporting the sport with over 20 gyms producing some of the world’s best boxers like Azumah Nelson, Ike Quartey, and Joshua ‘The Hitter’ Clottey, as well.

The History behind the Elimina Slave Trade