26-year-old Steve French Oduro of Ghanaian womenswear label Steve French has always been destined for greatness and the stars are beginning to align for him.

French, a talented fashion illustrator, textile designer, stylist and designer has always been one to watch even in his early days as a student at the Radford University College which also produced other prolific young designers like Papa Oppong and Afua Biney.

Steve French who won a coveted Gucci Fellowship in 2019 has always used his fashion to tell stories and make profound statements. Vlisco & Co, Studio 189, Ghana’s Embassy in Ethiopia, the Australian Embassy, and the International Fashion Week in Amsterdam are part of the brands/institutions that have worked with this young fashion prodigy.

For his SS16 collection, French took the world by storm at his final year presentation where he tackled mental illness with a minimalist yet avant-garde collection that featured belts, puff sleeves, pleats in white, grey and black.

These days he makes clothes for supermodel and fashion icon, Naomi Campbell who turns 50 on the 22nd of May. For Essence Magazine’s 50th anniversary (another iconic and revolutionary black publication), Ms Campbell wore his yellow and red wax print dress also known as Ankara from his Celebration of Life Collection for the magazine spread which was shot in her home. 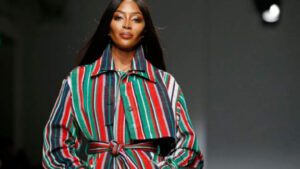 Steve is not new to celebrity endorsements as he’s styled the likes of Deborah Vanessa, Lydia Forson and Efya but Naomi’s choice of him as a young designer is a staunch belief in him and his creativity.

“wearing here young designer from Ghana @[email protected] one of my babies that will go to @gucci for 1 year for the Gucci design fellowship program ?????????? #naomiafrica????????,” she posted on Instagram.

Steve has also been featured in CNN, Ndani Lifestyle and iD Magazine (Netherlands) for his quirky and bold styles. He lives in Accra, Ghana with his parents and younger brother.