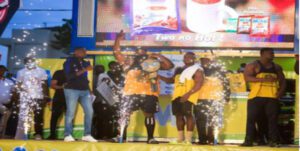 This happens to be Shaka Zulu’s third title, having won in 2017 and 2018 before a three-year break as a result of his relocation to the United States.

Having heard of the 10th season of Ghana’s Strongest, Damian came back home to partake after his long-term break.

Although the final events were unsurprisingly gruelling, Shaka Zulu emerged the winner.

Shaka Zulu took home GHC10,000, a brand new car and will be in South Africa to participate in the prestigious Arnold Classics Africa.

ChasBoat is a lyrical poet with a knack for proofreading and editorial work. He also spends his leisure time watching movies, listening to music, and actively partaking in sports