Hidden at the centre of Abuakwa south, is the Bunso Aboretum, an eco-tourism site and an ideal place for adventure, picnics, and relaxation. The site has over 600 species of trees used for various medicinal purposes.

Bunso, offers visitors a combination of a native forest and species introduced to Ghana by the Plant Genetic Resources Centre of Bunso, which uses the facility for research. The site contains over 110 species of bird 30 species of butterflies and a herb garden with over 40 species.

According to legend,  “The 40-acre forest reserve that hosts the Aboretum belongs to the Akyem Abuakwa Traditional Council who leased it to a mining firm in the early twentieth century for surface mining but later given to another company known as African Products Department for rubber and cocoa plantations in 1917” (www.visitghana.com, Retrieved in May, 2021).

After the company left, two British bought the park on which they built a guest house in 1935. The guesthouse is currently serving as the official residence for the Vice-Chancellor of the University College of Agriculture and Environmental Studies; an institution established by the Okyehene, Amoatia Ofori Opanin II.

In 1946, the facility was then acquired by the Plant Genetic Resource and Research Institute of the Council for Scientific and Industrial Research (CSIR) who have been managing it ever since.

The forest reserve has some of the rare tree species including Garcinia Kola, known locally as Twepea, well known for its health benefits. Garcinia kola is said to be used in many tropical countries to fight infectious diseases and also known to possess anti-inflammatory, antimicrobial, and antiviral properties.

Other tropical tree species found at the centre include Okure, mostly used for dugout canoes as well as the Alpha and Omega trees used for the local sponge (sapowie).

You can embark on your first adventure hike or visit the Bamboo Cathedral. The park also has;

The canopy walk gives the experience of walking ropes suspending high in this forest area and getting a good view of the several tree species from up high. This is the second-highest canopy walkway built after Kakum. 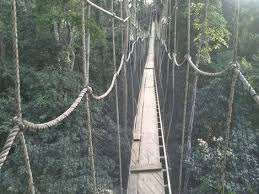 This child-friendly park has a purpose-built canopy walkway for children. A way to include the children in your trip to this park.

With a wide variety of butterflies, a walk through the park forest offers one the opportunity to discover and learn about several species of butterflies and at times birds.

For lovers of horse riding, one of the latest additions to the park is two horses that offer patrons the opportunity to ride through the park. 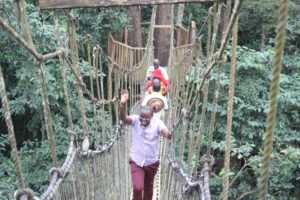 Build up some adrenaline by riding down the 50-metre long newly constructed Zipline. The unique thing about the zipline is that entry to and from the Zipline is via a suspended ropes walkway.

Be sure to pick a day and tour the arboretum with a guide to learn about the native and exotic plants, including their medicinal properties for traditional healing, or go on an indigenous foods tour to learn the many ways in which local people harvest food from local plants. Guests can also experience village life and cocoa farming on a tour of the nearby village.

How To Get There