The Gomoa Pomadze based  institution is a subsidiary of the Kenpong Group of Companies which is owned by former Asante Kotoko vice chairman Kennedy Agyapong.

Kwesi Appiah comes into his new assignment with some amount of coaching experience.

Appiah led the Ghana Under-23 team, the Black Meteors, to win Gold in the 2011 All Africa Games held in Mozambique and became the first black African coach to lead Ghana to the World Cup in 2014. 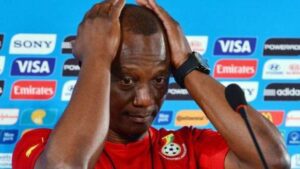 Appiah, a left back, played club football with Asante Kotoko, playing for them between 1983 and 1993.

Appiah worked as an assistant coach for his former club Asante Kotoko from 1992 to 1995, deputizing for Malik Jabir.

He has received technical training from English clubs Manchester City, and Liverpool.

James Kwesi Appiah was Ghana’s assistant coach between 2007 and 2012,

Appiah was coach of Ghana U23 as they won the 2011 All-Africa Games.

He was appointed as the Head coach of the Ghanaian national team in April 2012, describing himself as “the underdog” in the process.

His Ghana team qualified for the 2014 World Cup in Brazil, making him the first black African coach to take the country to the World Cup.

He was given a new two-year contract in May 2014. After the country exited the World Cup in the group stages, Appiah defended his team.

He left his position as Ghana manager by mutual consent in September 2014.

He became manager of Sudanese club Al Khartoum in December 2014.

In April 2017 he was re-appointed as the coach of the Ghana national team, replacing former Chelsea manager Avram Grant. He was sacked in January 2020.

Appiah’s new job will be his first since resigning as coach of the Black Stars in January 2020.